I wasn't sure about making this version public, as it's a small update between larger ones, but I received a very heartfelt message from a fan who was apparently really looking forward to this one. Thanks to her, everybody gets the update now. ^-^ Just be aware that this one is a "rest" update to spend time with your party and see consequences of your actions during the war.

TLS 0.36.2
- More bugfixing and refinements.
- Graphical fixes thanks to Decanter.

TLS 0.36.3
- Altina fixer event added. Unless you have a previous save with Altina missing, this is not a critical update for you.
- Various minor fixes.
- New Sabitha eyes thanks to Decanter.

The next release will be the big Stenai update, which I am very eager to bring everyone. It will be larger than a normal update, but I'm doing my best to launch straight into it and hopefully I'll be able to finish it in good time.

In other news, my games are on sale starting today. Do check them out on Steam and itch.io. Notably, on Steam I'm reducing Ouroboros to its lowest price to date, so this would be a good time to give it a try if you have been waiting.
Posted by Sierra Lee at 3:11 PM 154 comments:

TLS 0.36.0
- Small update laying the groundwork for the Stenai update.
- Three new scenes added.
- New synergy skill for Aka and Uyae.
- There is now a merchant in the slums that sells Yhilini orc equipment, once Yhilin has reached its final state.
- Based on player requests, there is a new option for training orcs in the courtyard, a group that has very high HP.
- An autosave script has been added thanks to Decanter. Comment if you want it to save after battles in addition to its current behavior.

TLS 0.36.1
- Refinements and bugfixing.
- There are new monsters and conversations when returning to the old war locations. Grubbak now reacts to the war events.
- Assorted minor additions around the world. These are probably not worth tracking down, but I hope they make the game seem more alive and responsive overall.

This isn't the biggest update in the world, but it's the best I have to offer given circumstances. I do think it's a nice little interlude with the characters and it clears out the content I wanted finished before I embarked on the Stenai update. That one will be a much larger update that I look forward to showing everyone.

Also, I was invited to add my games to the MiKandi and JastUSA stores. You can now find Ouroboros, Crimson Gray, and Desecration of Wings here:
https://mikandi.com/games/studio/7
https://jastusa.com/games?publisher=151

That is all for now. I look forward to bringing everyone the Stenai update as soon as I can complete it!
Posted by Sierra Lee at 3:04 PM 8 comments:

Three things to talk about today! First, Steam has approved the page for the sequel to Crimson Gray, subtitled Dusk and Dawn:
https://store.steampowered.com/app/894460/Crimson_Gray_Dusk_and_Dawn/ 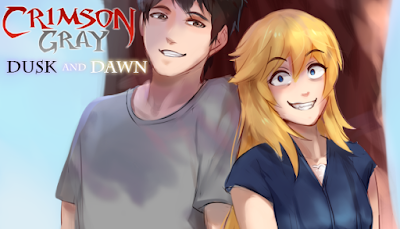 If you are interested in seeing more of the story of Lizzie and John, please do check it out! I'm not sure exactly when this VN will be released (sometime later this year), but if you want to be informed when it comes out, please add it to your wishlist.

Second, we have more fanart for TLS, this time featuring Nalili! You can see it on my HentaiFoundry or Tumblr.

Finally, an update about TLS 0.36.0: the next update will be a smaller one, with some scenes and development but not the next major chunk of the plot. The reason for this is that I don't want to cram these additional things into the Stenai update, which will deserve 0.37.0 all to itself. I'm really not sure about the public release of this one; it will depend on various factors.
Posted by Sierra Lee at 2:01 PM 36 comments: