The Endless Court is eternal, ruled by Immortals who have guided the four races of the world since the dawn of time. But they seem very concerned with preventing anyone from studying the broken ruins that litter the world, and peace is more fragile than it seems.

Felana is one of the historians at the margins of society, oppressed by the anti-scholarship edicts of the Endless Court. All she wants is to take care of her daughter and study in peace... but as war brews among Immortals and her knowledge suddenly becomes troublingly relevant, she isn't going to have that option. 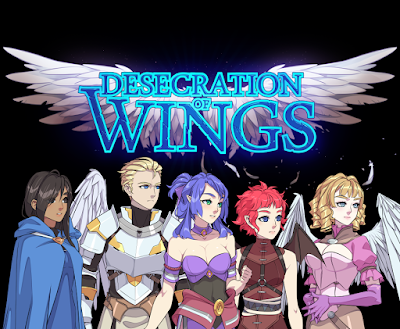 You can get the game on the following platforms:
http://store.steampowered.com/app/793450/Desecration_of_Wings
itch.io
GameJolt
Nutaku
DLsite English
DLsite Japanese

Patch
Use this patch to convert the Steam version to the game's intended form:
Download Patch
Instructions can be found in the patch folder.

Background
Desecration of Wings is actually a fairly old project in some ways - pieces of it are even older than TLS. But I'm glad that I finally rewrote, finished, and released it! I designed this one to try to be a "normal" RPG without any meta twists. It aims to have a good plot, good progression, and overall balance of the different gameplay elements.

I am never working with RPG Maker VX vanilla again, though. Such an awkward engine. XP Still, I think this is a nice title that rounds out the different types of games that I've completed, I hope people enjoy it!