I'm not just punning here, it's an actual event. ^-^ It won't be here on the blog, due to how the platform can be about adult images, but if you follow Annikath or myself on Twitter, you'll be getting a series of pictures showing TLS characters having, shall we say, a jolly time.

Otherwise, I hope everyone has a great December! Please look forward to more TLS updates, as always, and also a final roadmap coming soon.

*Requires RPG Maker VX Ace RTP to be installed. If you don't know what that means, use the RTP link.
I think I've already said everything there is to say about this one in previous posts. I hope everyone enjoys it and wish good Thanksgivings or weekends to all!
Posted by Sierra Lee at 3:02 PM 29 comments:

- It's still not time for the big portrait update, but one of them is in the game: the portrait of Wendis as seen in the beginning of the game.

- In addition to the techniques learned as part of quests, there is a new synergy technique available in the base courtyard.

- Fheliel and Neranda now appear in the Hall of Mortality if they have joined the harem.

- Zelica's tree (from last update) now has custom tiles thanks to Lamsey.

- In addition to those illustrated scenes, there's a new SFW scene: Vhala in combat during the Third Arclentian War.

This is a big one with three complete harem quests and a whole lot of assorted content! I hope it will be out publicly in a week, but it might take two if it takes more work to polish. I was running myself pretty ragged finishing some of the last pieces.

Once Ever After final release!

It's out! If you have been waiting during the Early Access period, you can now get the game via these two fine stores:

(other stores, such as Nutaku and DLsite, are pending their approval processes)

There's some good news implicit in those links: I had previous believed that it would be completely impossible to host OEA on itch.io. After looking at some documentation and emailing their support, it turned out not to be an obstacle after all! As always, I try to provide alternates to support player choice.

Bad news: I wasn't able to jump through all the hoops for Nutaku and DLsite distribution this week. Nutaku needs multiple weeks to test compliance, apparently, and DLsite always has its own weirdness going on. Thanks to those who helped me not burn so much time on the censorship necessary for the Japanese version.

I now also have an official Patreon link, finally. For those who have been long-time patrons, all you need to do to receive a free copy is to message me. ^-^ Anyone who prefers to get the commercial versions, please leave reviews if possible!

So... while there are some lingering details and I may need to take some time for comments/bugs/etc, this mostly closes the book on this game. Another completed 1.0.0 in the bag!

The newest version of Once Ever After is now available to everyone who owns the game on Steam! More here, if you haven't already played it:

This is my last planned content update for this game, so my intent is for it to leave Early Access and be finished (for good) once I've confirmed there are no standing issues. That is also the time that the finished game will appear in other stores, which will be announced here.

Posted by Sierra Lee at 3:05 PM No comments:

Though I mostly work on games these days, there's a reliable contingent asking me to write more erotica. I am... only sort of appeasing this group. But what I have for you does include some sex scenes. This is a little something I did to clear my creative palette between other work. 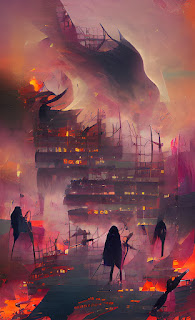 He was happily married and employed, so the idea of civilization collapsing held no appeal. He didn't want to see strange windows announcing that the apocalypse had begun and offering a chance to become a hero. The world turning into a game just means that everything he's built could be destroyed.

But his life is changing anyway, because there are zombies and worse appearing on the streets. The system controlling the apocalypse is malicious, highly aware, and determined to twist the world into something all too familiar. The system wants Devin to play along... he intends to fight back."

Anyway... this is me indulging an idea that I don't think is a perfect match for the site. The system apocalypse element fits, certainly, but even people who like almost pure wish fulfillment can be weird about sexual content, plus there's not as much of a market for sex involving established couples. But that's why it's indulging myself and just creating something I wish there was more of. I'd be much obliged if anyone interested would go read the chapters at the above link so as to feed the algorithm.
For those interested in the future schedule: the new OEA content is basically polished, so you'll see that game be released for good, then the next release will be more TLS content.
Posted by Sierra Lee at 5:16 PM 6 comments:

There is a new build available to supporters on Patreon and SubscribeStar. I'll put the release notes below, but I'm mainly posting about it so that it's clear the project is still undergoing work.

- A brand new scene drawn by Crescentia! It is automatically unlocked for anyone who has reached the gallery, but naturally occurs in the early game during the first visit to Wilhelm's Tale.

- In addition, a new variant scene previously not accessible has been added.

- A new quest has been added to Hoodton. This one is available over the entire game, as it unlocks the above scene.

- Another quest has been added, but only to very early Hoodton. This offers small advantages but is mostly there for flavor and additional content.

- More enemies respawn in the ice palace, in case players feel they need to level while inside.

As you can see, this is more of a content update than the previous bugfixing and balance releases. In addition to the new quests, there's brand new scene art from Crescentia (as well as some previously finished but unreleased art). This is planned to be my last content update for OEA, barring brand new ideas for sidequests. So once everything is polished up, the game will leave Early Access and that will be another completed game on the books!


Support the game on Patreon!
Completed Games
Crimson Gray
Crimson Gray: Dusk and Dawn
Desecration of Wings
Once Ever After
Ouroboros
Games in Development
Don't Save the Princess
Sierra also used to write general erotica you can find at Sexy Zombie Fun Times.