In addition to more balancing and getting feedback from players, I used this week to finish off some old bugs and minor issues that had been low priority while I was rushing on new content. These are not a big deal, but I do try to go back and polish whenever I get a chance.

As a reminder: I might make retroactive changes to this section to balance the entire war, once I finish the next update. So if you definitely want to play only once, maybe wait a little. Having said that, this update has loads of new content for everyone to play!
Posted by Sierra Lee at 3:26 PM 207 comments:

You can now purchase the game at the following places:
Steam
itch.io SFW
itch.io NSFW
MangaGamer

See the game's page for the NSFW patches and more info. Also, Ouroboros is on sale at itch.io and MangaGamer! 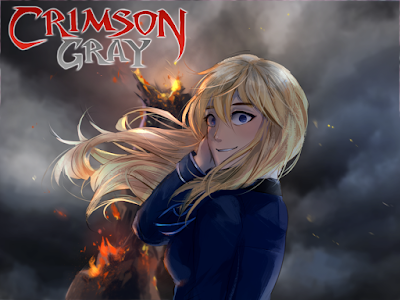 John is a young man suffering from severe depression. As he loses his sense of purpose in life, he begins to see the world in unfocused gray. Just when he begins to lose all hope, John meets a girl... a very special girl.

Your every choice will impact both characters' mental states, changing their fate. John might reject Lizzie, succumb to his depression, or die violently. Lizzie might lose control and ruin her chances or become obsessed with shadowy conspiracies that may or may not exist. Or just maybe the two of them might be exactly what the other needs and their story could end in happiness...
Posted by Sierra Lee at 3:31 PM 16 comments:

This is the extra large update I promised, containing the majority of the war. If you want a preview, definitely check out the update with screenshots that I'll be posting on all the forums.

Due to the length and complexity of this update, I can't promise it will be out in the usual exactly one week. There are a lot of calculations going on underneath the surface, and I want to make sure they're all correct and well-balanced before I release the update publicly.

Meanwhile, if you were waiting for Crimson Gray to appear on MangaGamer, the preorder page is now online. I'm still mostly looking toward the Steam release, but definitely use MG if that's your preference:
http://www.mangagamer.com/detail.php?goods_type=1&product_code=1027

So yes, public release before too long, then the end of the war and chapter three after that!
Posted by Sierra Lee at 3:25 PM 34 comments: