The post of thoughts I wrote on the fifth anniversary of TLS is now available to everyone. Read it here if you're interested:
https://www.patreon.com/posts/31780081

I had a lot of feelings about that, but I put them into the post. =P Thanks to all of you who enjoy my work, however long you've been following the game!

Several people have contacted me regarding trying to nominate TLS for the Steam Awards. There is no chance that it will rank, but it's harmless and I'm honored you like what I've done. If you want to help out, here would be helpful things in order of efficacy:

Did you know this is the fifth anniversary of the day I published the very first version of this game? I'm going to be posting a retrospective on Patreon soon, but first I wanted to get the newest update out publicly.

I don't have much to add this time. This update has some of everything, the longest sex scene in the game, and a lot of fun payoff in Stineford. Hope you enjoy!
Posted by Sierra Lee at 3:25 PM 56 comments:

TLS 0.47.0
- Big Stineford update!
- Two new scenes, including the longest in the game by a fair margin.
- The first final party member sidequest is introduced, though it can't be finished yet.
TLS 0.47.1
- Bugfixing, typos, and minor improvements.
- The self-destruct attack now works, thanks to Decanter.
- The Ledger is now updated to the new version.
- Sprite animations now play when you access the bed.

Time for the Stineford update! This isn't the longest update in TLS history, or the most complex, or the most combat-intensive... but it has a decent amount of everything. Overall I'm quite pleased with this one, as I think it's a balanced update that will hopefully give everyone something to have fun with for a little while.

This update also contains the longest sex scene in the game... several times longer than the previous record. It's as long as a short story, long enough that it might be a bad idea. =P Anyway, this one is bigger than average but will probably go public in a week.
Posted by Sierra Lee at 3:46 PM 24 comments:

Don't Save the Princess Public Demo

The newest TLS update is incoming, but first something completely different. If you're looking for completely free content, everything that's been completed on one of my side projects is currently available on Newgrounds:
https://www.newgrounds.com/portal/view/741269 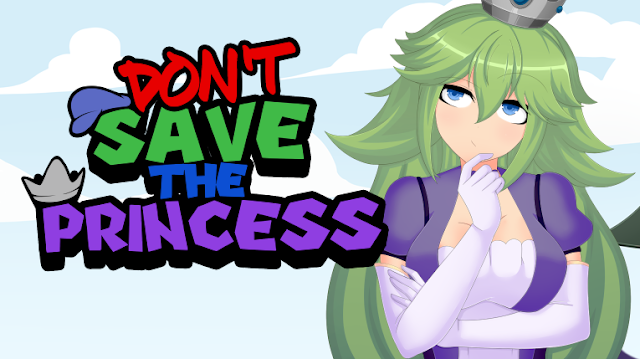 This is me trying to do something (almost) completely different from everything I've done before. It's an anti-runner that tries to flip the usual formula, letting you control the obstacles to strike the running character. The storyline and characters are aiming for humor, as you'll see in the introduction.

Will this idea work? I can't say, but over the past while I've put together the first two worlds as a sample of the core gameplay loop. It contains four CGs, plus all the levels/dialogue. Please take a look and tell me what you think!

The Newgrounds link above will let you play everything that's been finished so far. If you want to follow the game's development, you can wishlist it on Steam here:
https://store.steampowered.com/app/951840/Dont_Save_the_Princess/
Posted by Sierra Lee at 3:26 PM 18 comments: